Recruitment of permanent staff commenced during the first year. RECW jobs were attractive and vigorously sought after. The remuneration for a lecturer in the State Government service was ₹169 per month; and RECW offered a starting salary of ₹ 350 per month on the basis of All India scales.

The Board of Governors was flooded with recommendations and pressures from all quarters.

Some of the permanent staff started joining during the same year. Dr. D.S.Reddy thus laid the foundation for appointing meritorious staff in spite of various pressures. Shree. B. Varaprasad was the first permanent staff member to join the College, in the Mechanical
Engineering Department (MED).

LECTURES IN HOSTELS AND POLYTECHNIC

Since the courses were in addition, a lot of adjustments were necessary from both institutions (ours, and theirs). Some of the sessions would start as early as 7:00 AM; and others would end as late as 6:00 PM.

The first lecture halls in the Hanmakonda hostel (2 sheds with asbestos sheet roofs) came up months after students joined the college. They were allowed to use the other facilities of the Government Polytechnic (Workshop/Labs/Drafting halls) for almost 3 years, in addition.

They used to cycle to the Government Polytechnic in Warangal to and fro, twice a day, roughly 16 miles in all (had to return to the Hostel for lunch). After all that travel during the day, it was found that studies in the room, completing assignments in time and preparation for exams were all that much more difficult.

Whenever Blacksmithy classes were scheduled for the late evening, the cycle journey back to the hostel seemed to take an eternity as we used to be totally tired and extremely hungry. They’d have dinner and fall asleep straight away.

The College was a residential institution from the beginning. Only those who had family
Staying in Hanmakonda or Warangal had provision granted to them to reside outside the hostel. These 75% ‘Day Scholars’ had to face travel problems similar to that of the hostel students, except they were travelling in the opposite direction most of the time.

They had to travel to the lecture halls in the hostel campus, to the Polytechnic for the sessions there and back home after the sessions were over, every day. One or two did not even own cycles; they would just walk from the Polytechnic to the Nakkalgutta Hostel, following the beaten pedestrian path shortcut via the Bhadrakali Tank Bund, Hanamkonda Town and Balasamudram. Joining the hostel-centric mainstream for sports or for extracurricular activities was that much more difficult for them.

The Nakkalagutta hostel rooms were very uncomfortable in the summer heat. With examinations approaching, some of the students would climb on to the terrace of the tenements at night to sleep there. Closer to the time of examinations, a temporary electric line would be drawn from the tenement to supply a 100W electric bulb. This would enable studies into the later hours of the night.

In one such night, one student broke into song, describing the desperation of having to come to terms with the approaching examinations. In a guttural voice, he sang the K. L. Saigal lament, ‘Ab Jeeke Kyaa Karenge’. It was very relatable and funny at the same time; the students would have a few laughs and some of the tension was released.

It was tough, but the students could make it good (or at least bearable) for themselves.

“A month before examinations was always the toughest. We would study late into nights. Sleeping under a mosquito net in the open was the only option then. Boards were hung on beds: ‘Please wake me up at
7:20 a.m. if still asleep.’ “ – quotes an Alumnus.

Divided by everything, United by Attendance;

Saved by the Early Birds.

This article is the five in a series of many, compiled by RECW’s 1964 batch for the Coffee Table Book, published in 2014. We thank Mr. S. Sampath Iyengar and his team (Batch of 1964) for giving us permission to share this with the NITW community. We also thank Professor CSRK Prasad for helping us make this happen. 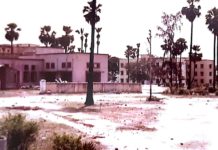